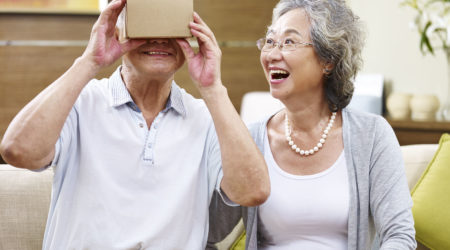 As healthcare systems in Japan face growing pressure from rising costs and a rapidly aging population, many are developing innovative medical technologies designed specifically for eldercare.

Japan is one of the oldest societies on earth—over 25% of its citizens are over 65—and given longstanding low birth rates and an aversion to immigration, it will likely continue to age rapidly in the coming decades. This raises the specter of acute shortages of health workers and a rising burden of disease from age-related illnesses like dementia and osteoporosis. It also threatens to increase costs in a country that already spends roughly 10% of its GDP on healthcare (which is high by global standards but still remains dramatically lower than the world record 18% of GDP spent in the U.S.)

“We call it a tsunami of aging,” said Dr. Yasuhiro Suzuki, Japan’s Vice Minister for Health, at the 2017 Asia Pacific MedTech Forum, an annual industry conference in Singapore. “We need to accelerate innovation to address this issue.”

Robots, VR headsets, are other devices are increasingly helping to fill the gap. Several such solutions were recently featured in a February 2018 video series at STAT, an American healthcare media site. They include a medical robot for the elderly and a virtual reality service that allows the homebound to experience the joys of travel. Another innovation is Paro, a robotic baby seal that some eldercare facilities use to provide a feeling of companionship to residents.

Of the many medtech R&D hubs arising in Asia, Japan is uniquely positioned to develop high-tech innovations like these. Long known as a global tech powerhouse, it has deep capabilities in biomedical engineering and advanced manufacturing, both of which are necessary to incubate cutting-edge devices and applications. It also has strong government support for medtech R&D, with leaders who have expressed commitment for policies to encourage innovation and fast-track regulatory approvals for novel devices.

Japan also has many cash-rich corporations investing in medtech. Of the top 20 largest companies, over three-quarters are making moves in the sector, according to a November 2017 report from consulting firm McKinsey & Co. Even more large companies are following suit. Electronics giants including Canon, Konica, and Nikon spent billions on medtech acquisitions in recent years. Insurers, automotive manufacturers, and firms in many other sectors are also making moves in healthcare technology.

Some stakeholders are working to build Japan’s capacity in medtech R&D. Japan Biodesign, for example, is a medtech fellowship program that helps aspiring innovators commercialize new medical technologies. Part of the Stanford Biodesign global network—which helped launch similar programs in Singapore, India, and Ireland—the program now has teams at three major universities in Japan, with plans to expand its footprint later this year.

Still, the path from the lab to commercialization in Japan can be difficult. “Japan has many great medtech researchers, but some struggle to translate their research into a viable business,” says Dr. Masakazu Yagi, Program Director for Japan Biodesign and Associate Professor at the Graduate School of Medicine at Osaka University.  “Part of the problem is a fear of failure—we need more mentors to help entrepreneurs and embolden us to take more risks.”

As more venture capital funds take interest in medtech, local researchers will gain more resources and encouragement to launch new businesses. One local champion is the Japan Organization for Medical Device Development (JOMDD), a private venture firm and incubator based in Tokyo, which partners with local medtech innovators to support fundraising, clinical development, regulatory submissions, marketing, and other aspects of the commercialization process.