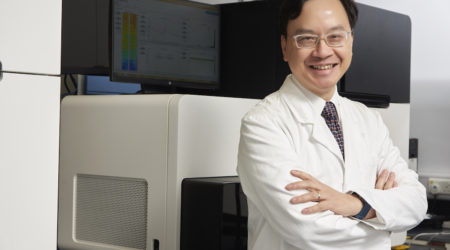 Above: Dennis Lo, Professor of Chemical Pathology at The Chinese University of Hong Kong (CUHK), at his lab. Photo credit: CUHK.

Cancer kills millions of people across Asia each year, but as the region develops, many countries are investing in novel diagnostic technologies for early detection and proactive treatment.

These technologies could help alleviate the growing pressure that cancer is placing on healthcare systems across Asia, and the suffering it causes. This is a mounting crisis. China, for example, had 4.3 million new cancer cases and 2.8 million deaths in 2015 alone. Reports of overflowing hospital wards there are common. The same goes for the emerging and frontier markets of Southeast Asia, where over 75 percent of cancer patients face death or financial catastrophe within a year of diagnosis, according to a 2015 studyby The George Institute for Global Health.

Cancer outcomes in developed markets like Japan and Korea are better, but as their populations continue to age, they may also struggle to contain costs and prevent unnecessary deaths. Age is a major risk factor for cancer, so even as standards of care improve and mortality declines for some types of cancers, overall incidence of the disease remains stubbornly high and growing across the region as longevity soars.

When found early, many types of cancers can be effectively treated. But while cancer diagnostics have been around for decades, many are not ideally suited for Asia.

“We still don’t have simple and reliable methods for early detection of some cancers that are common among Asians,” says London Lucien Ooi, a surgical oncologist and Professor of Surgery at Duke-NUS Medical School in Singapore. “Asians are also less proactive about getting screened and more reluctant to discuss symptoms than Westerners, so they tend to present with advanced malignancies that are much harder to treat.”

Dennis Lo, Director of the Li Ka Shing Institute of Health Sciences and Professor of Chemical Pathology at The Chinese University of Hong Kong, is working on solutions for these diagnostic challenges. Best known for discovering the presence of fetal DNA in maternal blood plasma and creating the first noninvasive prenatal tests, this renowned scientist also developed techniques for detecting cancer in blood samples, an approach commonly referred as a “liquid biopsy.”

One area of interest for Lo is nasopharyngeal carcinoma (NPC), a type of cancer that afflicts the nasopharynx, an area behind the nose in the upper part of the throat. NPC disproportionately impacts people in the southern regions of China, particularly Guangdong and Hong Kong. His team recently developed a blood test that can detect NPC by searching for DNA fragments of a virus associated with the disease. Crucially, this approach works even in early stages of the disease, according to evidence presented in an August 2017 article in the New England Journal of Medicine.

“NPC can be asymptomatic and often gets overlooked in its early stages,” says Lo. “By finding the disease before it advances, we can potentially improve survival by a factor of 10x.”

Another advantage of liquid biopsies is that they can obviate the need for surgical removal of tissue, which is sometimes unfeasible for malignancies that arise in fragile or hard-to-reach parts of the body, or yields too small of a specimen to inform treatment selection (some of today’s most powerful therapies are “targeted” specifically to the genomic profile of a tumor). Liquid biopsies can also be performed with greater regularity, holding promise for faster detection and easier monitoring of tumor progression.

One leading provider of liquid biopsies for treatment selection is Guardant Health, which combines genomics with high-powered analytics to analyze advanced solid tumors. This means they build a genomic profile of a tumor and match it with associated treatment options, including targeted therapies that may have greater efficacy and fewer side effects than broad-based chemotherapy. Founded in the U.S., the company received $360 million from Japan’s SoftBank and other investors last year and has set up Guardant Health AMEA, a joint venture dedicated to developing and deploying the technology in Asia, the Middle East, and Africa.

“Countries like Japan and China are hungry for novel diagnostic approaches to address their growing cancer burden,” says Simran Singh, CEO of Guardant Health AMEA. “We are already running large studies in Japan for treatment selection in advanced gastrointestinal and lung cancer to validate our technologies locally and also better understand Asian genotypes.”

Other companies are using novel techniques in medical imaging and data analytics for cancer detection. Cyrcadia Asia, for example, is a Hong Kong-based company developing wearable technology that monitors for breast cancer by detecting circadian temperature changes in breast tissue. Also, some healthcare systems across the region are partnering with tech vendors to explore using artificial intelligence tools in oncology centers.

Although the majority of global R&D for medical technologies still happens in United States and Europe, Asia is gradually becoming a hotbed for diagnostics innovation. As more Asian researchers take on local challenges in cancer and other diseases, they will drive advances that make lab diagnostics better for everyone.