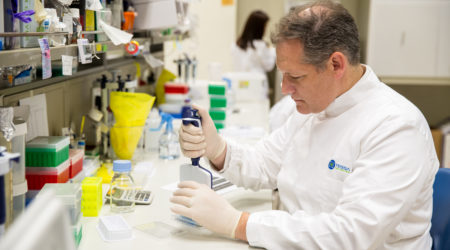 Singapore’s 20-year effort to establish itself as a global hub for biomedical R&D is starting to show results.

For the past two decades, the tiny Southeast Asian city-state made large public-sector investments in biomedical R&D. It also launched ambitious initiatives to attract world-class scientific talent and instituted policies to encourage translation of basic research into commercially-viable healthcare technologies. And while the scale of its commercial successes so far is still relatively mild by global standards, Singapore now seems poised to play an outsize role in an era of rapid biomedical progress.

“We are at an exciting inflection point,” said Dr. Benjamin Seet, Executive Director of the Biomedical Research Council at A*STAR, a public research and technology organization that funds R&D directed towards economic outcomes in Singapore. “After working for years to build our biomedical talent and infrastructure, Singapore’s public research institutes and universities spawned nearly two hundred new biotech and healthcare technology companies in the past few years.”

Singapore’s biomedical innovation ecosystem is also growing more diverse. Promising companies are arising in different fields, including medical robotics, cancer therapeutics, drug discovery platforms, and lab diagnostics. Many of these companies are targeting diseases that are common in Asia, which present enticing investment opportunities given the region’s vast unmet medical needs and rapidly rising middle-class. Funding rounds of $10 million or more, once uncommon in Singapore, are increasingly routine.

Entrepreneurs and investors are emboldened by recent milestones in the local innovation ecosystem. In April 2018, for example, a Japanese industrial conglomerate purchased Veredus Laboratories, a Singapore-based diagnostics company that develops and markets innovative tests for infectious diseases. Founded in 2003, Veredus was reportedly worth over $80 million at the time of acquisition, making it the first significant exit for a homegrown medtech company to date.

Another milestone was set by Aslan Pharmaceuticals, a Singaporean biopharma company that develops novel treatments for cancers that are prevalent in Asia. Founded in 2010, it listed on the NASDAQ in May 2018, becoming the first company of its type to IPO on a US exchange and blazing a trail that other Singapore-based companies will almost certainly aim to follow.

“We finally have some real exits on the board and real money flowing into the ecosystem,” says Abel Ang, CEO of Accuron MedTech, Southeast Asia’s largest medtech company and an early investor in Veredus and Aslan. “It’s a similar feeling to when our tiny country won its first-ever gold medal at the 2016 Olympic Games in Rio, inspiring confidence that we can win on the global stage.”

A few companies are attracting record-breaking amounts of venture capital. One local leader is Tessa Therapeutics, which raised $130 million in the past year to further develop their “cellular immunotherapies” for cancer treatment. This cutting-edge approach—widely considered to be among the most exciting frontiers in cancer research today—involves harvesting a patient’s own immune cells, modifying them to have new cancer-fighting properties, multiplying them in a lab, and then reinfusing them back in the body to seek out and destroy the cancer. Other Singapore-based companies taking this approach include Medisix and Lion-TCR, which both raised $20 million in Series A financing in May.

Public and private organizations are adding to the momentum with new programs to encourage commercialization of homegrown biomedical research. One example is JUMPStart, a joint initiative of the city-state’s two leading research universities—the National University of Singapore and Nanyang Technological University—to bridge the gap between academic research and biomedical market opportunities (program representatives say that they helped build 11 new ventures and trained over 70 bio-entrepreneurs in the past two years). Another example is SGInnovate, a private “venture catalyst” that is funded by the Singapore government to drive high-tech innovation, and which has several healthcare investments.

But despite all these signs of progress, some worry about ongoing challenges for healthcare innovators, such as a cultural tendency towards risk aversion, excessive controls on health data sharing, and competition from other Asian healthcare hubs like Hong Kong and Shanghai. They note that Singapore’s recent wins are still relatively small and that the country has yet to produce any major multinationals.

“Singapore still has work to do if it wants to become a biomedical innovation hub,” says Dr. Carl Firth, CEO of Aslan Pharmaceuticals. “It needs more access to smart capital, a greater willingness to focus on drug development, and better commercial expertise for building its homegrown champions.”