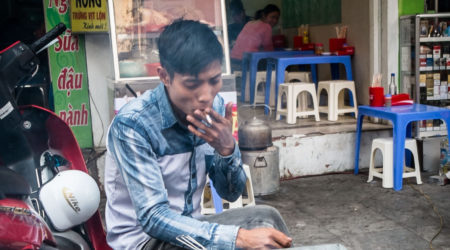 A little over a year ago, I attended a ceremony for the launch of a new IT system at a hospital in a remote Vietnamese province. The event marked a major upgrade in the province’s healthcare infrastructure. The new IT system promised to improve efficiencies, reduce costs, and prevent medical errors. It was an exciting step forward in a country that is still a greenfield for healthcare technology investment.

I went to the event because I was curious about the state of healthcare informatics in Vietnam’s less-developed regions. At the time, I was working at a Singapore-based startup that sold analytics services to healthcare organizations in Vietnam and other emerging markets. I was also writing a regular column about healthcare in Asia for Techonomy, and I wanted to get an inside look at some of the transformations I had been covering.

The event was well attended. It brought together dozens of representatives from local and national health authorities, as well as a delegation from a foreign development organization that helped finance the project. It included the obligatory ribbon-cutting festivities, the kind with politicians and businessmen posing for vanity shots while most of the other attendees played on their phones. It also included a tour of the main hospital and the various ancillary sites where the system was implemented.

It looked like a job well done. The IT system had its tentacles in most of the departments of all the sites, bringing together a disparate suite of operations—from billing to laboratory records and everything in between—onto a unified digital platform. It was the kind of system that you’d expect in to see at a modern hospital in any developed country, but out in the sticks of Vietnam, it was impressive.

Throughout the event, however, I was repeatedly distracted by a persistent annoyance. Everywhere we went, people smoked. And at every meal except breakfast, people drank. None of this was too out of the ordinary. In many Asian countries, smoking and drinking are a central part of business culture. Yet seeing these behaviors in the context of a public health event was still a bit odd. I wonder if anyone else noticed the irony.

The smoking was in my face from the moment I arrived at the hotel where the ceremonies were held. Like many local hotels throughout the country, there was no taboo against indoor smoking. In the lobby, men smoked at coffee tables just a few meters from the door. Smoking was also allowed in the rooms and hallways. There was even a waist-level ashtray by all the elevators for those who needed a smoke on their way to or from their rooms.

At a banquet on the night before the ceremony, people also smoked and drank at the dinner table. While I’m not a smoker, I often enjoy a few glasses of beer or wine on festive occasions. But this event felt more like a college frat party than a professional gathering. The drinking was competitive. The attendees, all but two of whom were men, had boisterous chugging contests. Within a few hours, most were stumbling drunk.

The whole experience highlights one of the ongoing challenges to healthcare progress in countries like Vietnam. Even as healthcare systems in these countries mature, they often fail to address the underlying behaviors that cause public health problems in the first place. And while some entrepreneurs and policymakers are working on solutions, such as disease management apps or advocacy campaigns, their impact will always be limited when the prevailing culture encourages unhealthy habits.

Vietnam faces this common paradox. As in many emerging markets, people are living longer every year. But they’re also increasingly moving to cities, eating junk food, spending ungodly amounts of time in traffic, and generally adopting more sedentary lifestyles. Obesity is on the rise and many are developing cardiometabolic conditions like diabetes, which is expected to grow rapidly in the coming years. Roughly half of all Vietnamese men smoke, and binge drinking is common.

In Vietnam and elsewhere, investments in medical infrastructure and technology will undoubtedly yield improvements in public health. But alongside these investments, we also need policies and leaders that encourage healthier behaviors. Changing deeply ingrained habits won’t be easy, but it’s essential for ongoing progress.