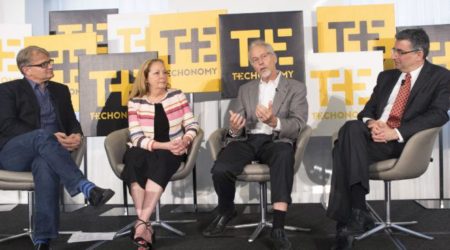 As new genomics technologies empower us to understand and manipulate the code of life with greater precision than ever, we stand at a crossroads. We can use these technologies to produce new medicines, biofuels, and other innovations that will bring major benefits to humanity. But we can also use them for malicious purposes, such as genetic discrimination or even the development of bioweapons. How do we ensure that they are used for good?

This was a key question for a panel on “Writing Our Genome” at the Techonomy Health conference in New York in May, moderated by journalist David Ewing Duncan of Arc Fusion. The panel discussed exciting advances in genomic research, as well as difficult questions about how to regulate and manage the technologies that make them possible. As a growing number of governments and companies around the world take up such technologies, the world faces an urgent need to coordinate efforts around shared standards. (Full video and transcript of the session is here.)

The session began with an overview of GP-Write, a groundbreaking recently-launched global research project to reduce the cost of genomic engineering and probe the frontiers of the field. The technology to “read” the genomes of humans and other organisms has been around for years, but we’re only just beginning to develop techniques to “edit” our genomes or “write” them from scratch. Yet as these techniques mature, we seem poised to make discoveries that will help us improve our health, control our environment, and possibly even take human evolution in our own hands.

“The goal of GP-Write is not only to deepen our understanding of life, but also to develop pragmatic technologies of general use in biology,” said panelist Nancy J. Kelley, one of the project’s leaders. “These technologies could solve some of the most important problems that we face in the world today.”

The project also supports dialogue about the legal, ethical, and social principles that should guide these efforts. These principles are particularly thorny when dealing with the engineering of human genomes, which raises deep ethical concerns. For now, the project has decided it will only work with genomes in cells, not human embryos. Jef Boeke, another of its leaders, said that the goal is to develop therapies and learn how the genome works, not to engineer people with predetermined qualities.

Not all countries, however, are committed to these same standards. Robert Klitzman, a bioethicist at the Mailman School of Public Health at Columbia University, mentioned that China and other countries have already experimented with gene editing in human embryos. While many genomics technologies are invented in the United States, most eventually end up being used as well by foreign interests. This includes governments with different value systems and strategic imperatives.

Klitzman also discussed the risk of genetic discrimination. He spoke about the Genetic Information Nondiscrimination Act, an American law that prohibits the use of genetic information in health insurance, but which doesn’t cover life insurance, disability insurance, or long term-care insurance. He raised concerns that insurers might start to demand genomic information as a precondition to underwriting non-health policies, empowering them to deny coverage to high-risk populations or adjust premiums based on genomic risk factors.

Several of the panelists drew parallels between today’s revolution in genomics and atomic physics in the twentieth century. Just as insights from atomic physics were used to produce both nuclear energy and nuclear weapons, insights from genomics can be for good or for evil. And just as discoveries in atomic physics prompted an arms race during the Cold War, we could be on the verge of a global race to uncover the secrets of genomic engineering.

Many countries are already rushing into the field and driving up competition for talent and equipment. China is making particularly big moves. Public and private stakeholders in China are sponsoring multi-billion-dollar genomics projects at home and making massive investments in genomics companies around the world. Other Asian countries, including Singapore and Qatar, are also running genomics projects and snapping up technology.

In an ideal world, growing global interest in genomics would accelerate progress in the field and lead to insights that benefit everyone. Yet we must remain vigilant about the bioethical and geopolitical dimensions of the genomics revolution, panelists agreed. Doing so will help us unite around shared interests and ensure that genomic technologies are used for the good of humankind.